The History of Bethel Baptist 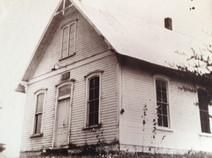 Friday, May 23, 1845 is a special day in the hearts of the Baptist of this community. It was the day that Bethel Baptist Church was organized. The church was sponsored by Locust Old Fields (now Canton First) out of which its members came. There were eighteen of these members, two of whom were Negros (slaves). The church applied for membership in the Tuckasegee Association the same year of their organization. Rev. John Haynes becomes the first pastor. The church remained in the Tuckasegee Association until 1886. At this time, it became a charter member of the newly formed Haywood Association.

The church continued to use the "Common Meeting House", until the summer of 1892 when it moved into its own newly erected building. The building was located near what is now Bethel Middle School. In the early 1950's a church building was erected on this site, on land given by Mr. and Mrs. Corbit Wright.

In the late 1950's a parsonage was erected close by the church. In 1975 the Wrights gave additional land behind the parsonage for a picnic shed, which was later constructed. In 1981 the church voted to start a building program. It consisted of a new addition for classrooms, a fellowship hall, a Prophets Chamber, enlargement of the auditorium and a new baptistery. The parking lot was also enlarged and paved during this time.

During the years a total of twenty-three men have served as pastor and at least eight men have been sent into the ministry from Bethel Baptist Church.

During the pastorate of our present pastor, Rev. Roy Kilby, the church has with the the help of the Lord, completed the building program begun in 1981, converted the picnic shed into a Youth Building, and completed the present building in 1992. Property across the road from the church was purchased in 1997 and is currently used in our college and career ministry and upward sports along with other special activities. In August, 2000 the chruch was incorporated. In 2002 the church purchased the old YMCA building in Canton from Blue Ridge Paper to be used as our Family Life Center.

Bethel Baptist Church now has a membership of approximately 1,441. The Lord has truly been good to His people.